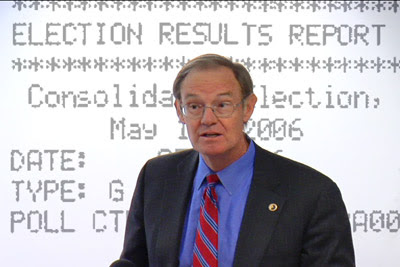 Not only did Pima County employees have access to the RTA ballot boxes, it appears that the Democratic party was mislead by Pima County about the records being protected. In the Democratic Party’s most recent Motion for Deposition of Iron Mountain Company, Pima County Administrator Chuck Huckleberry is quoted as follows:

In addition, we need to protect, secure and seal any information related to Division of Elections actions regarding not only the November 2006 election, but also the May 2006 RTA election. Even thought the ballots/returns for the RTA election are eleigible for destruction puruant to A.R.S. 16.-624, please ensure that all ballot and election returns for this election now stored at our contract records management facility are retained, with specific instructions not to destroy these documents. Further, since the allegations are against an official of the Division of Elections, it would be appropriate to ensure that there are very specific instructions approved by the County Attorney to the contract records management firm that Division of Elections personnel, including you as the Director, and myself as your immediate supervisor, are not granted any independent access to said records without independent oversight and supervision. This will ensure that County Administration and the Division of Elections cannot be accused of having independent access to the ballots and altering same.

We need to take action to ensure that all documentation, ballots, electronic files and other information sources are secured so they cannot be altered, tampered with or destroyed as I am sure an accurate and independent review of this material will verify that the allegations are made by Mr. Risner are absolutely untrue.

As Bill Risner puts it:

In spite of Pima county’s strong statement that “all documentation” and “other information sources” would be secured and Iron Mountain would be so instructed based upon “specific instructions approved by the County Attorney” the Iron Mountain manager testified that such instructions were never made.

At the moment that Terry Goddard and his men took possession of the ballots and poll tapes, workers at the Iron Mountain facility could have been asked about who had access to the boxes containing the RTA election materials. What they would have learned at this moment should have been enough to inform them of the need to forensically check the ballots to determine if they are genuine.

AZ Attorney General Terry Goddard’s actions surrounding the poll tapes involves Bill Risner’s letter to Terry Goddard informing him of the Democratic Party’s pending agreement to obtain the poll tapes from the RTA election. In this letter, Bill Risner informed Terry Goddard that the poll tapes would be inspected by an expert who can easily detect a specific type of foul play. This form of cheating involves the reprogramming of flash memory cards. Each precinct recorded their specific result onto their own flash memory card. The Pima County Elections Division is suspected of reprogramming a portion of the cards to create results that reflect something different than actual results of their corresponding precinct’s vote totals. When this form of cheating is successful, poll workers would simply print out the corresponding poll tape and sign the tape for verification without suspecting any foul play. An expert with a hand lens, however, can detect imperfections attributable to a reprogrammed flash memory card. Once the poll workers have finished, the flash memory card is then delivered to the main elections office for the central tabulator. At this point, it’s important to note that even when the flash card reprogramming is unsuccessful, end of day poll tapes would still be generated at the precincts.

Remember, the Pima County Elections division is suspected of reprogramming these flash memory cards for three main reasons (out of at least 20):

2. During the 2006 RTA election, Pima County was found to be in possession of the precise, obscure tool used to reprogram the very type of flash memory cards used in Pima County’s election machines. The excuse by the County for having such contraband was that the computer technician wanted to find out whether such reprogramming of flash memory cards was possible with that specific device. This explanation contradicts Pima County’s contention that security threats can only come from outside of the elections division.

Attorney General Terry Goddard’s decision to take the poll tapes with the ballots appears to have been made after it became clear to him that the Democratic Party was close to obtaining the poll tapes and that an expert could detect foul play by looking at those poll tapes. This is logical behavior for somebody wishing to prevent the discovery of foul play through the poll tapes.

There is very strong circumstantial evidence that Terry Goddard is an accessory to the crimes likely committed by Pima County’s elections division during the 2006 RTA election. Terry Goddard clearly had a choice to follow the straight and narrow in his investigation and examine all of the evidence. Instead, he opted to perform an exercise in public relations by presenting the illusion of an investigation. Why else would a seasoned white collar crime investigator go to the trouble of counting ballots behind glass and announcing his “findings” to the public yet leave so many stones left unturned?